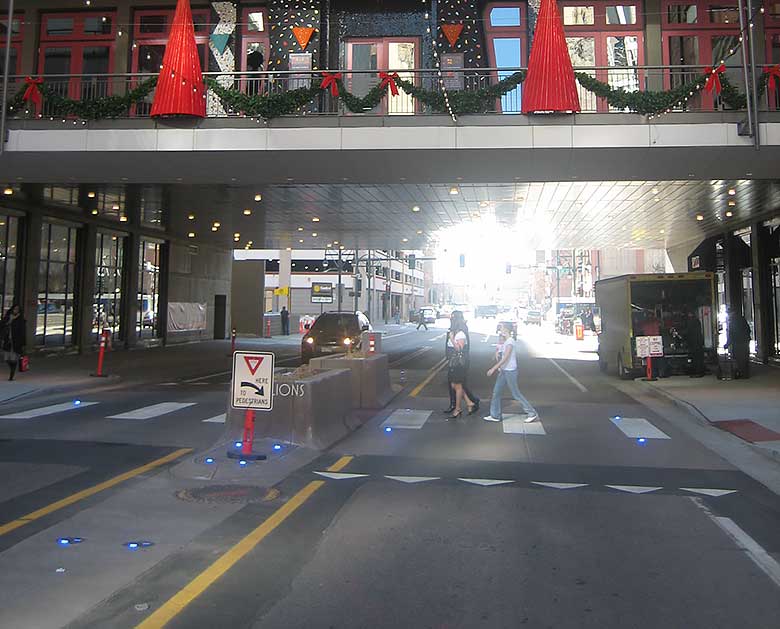 A new crosswalk was needed at the Pavilions to allow shoppers access to both sides of the center. To enhance safety, the crosswalk was illuminated with in-pavement warning lights from Traffic Safety Corp.

Gart Properties, new owner of the Denver Pavilions shopping center, had the dream of creating a more attractive and cohesive retail scene in the heart of the city. Semple-Brown Design Architects was hired to modify entry points into the Pavilions, illuminate stairways, add an escalator, and install video screens and lighting effects.

The firm was also directed to improve the circulation of shoppers throughout the center. One major obstacle was the busy two-way street separating the two sides of the complex. Matt Trasen, Gart Properties, explains the situation, “Most people only shop on one side of the center because they won’t risk crossing the busy street, which separates the two sides.” To improve safety, a concrete safety barrier with embedded lights and an in-pavement crosswalk warning light system were designed.

Once the decision was made to use in-pavement lights, the question came down to which system to use. The selection criteria included: a wired system for added reliability; AC power, instead of solar, for 24/7 operation; fully-flush fixtures to provide a snowplow proof installation; and blue, low power LED fixtures to fit the color scheme of the center. After investigating what was available on the market, the decision was made to go with the TS-600 fixture from Traffic Safety Corp. (TSC). In addition to meeting all specified requirements, the TS-600’s bi-directional capability further enhanced safety by improving pedestrian visibility at night, and the self-cleaning lens design reduced the need for maintenance.

Semple-Brown Design Architects contacted TSC National Sales Manager Charles Cunningham to help place the order. Charles explained to them that the use of steadily illuminated, blue LEDs was a deviation from the Manual on Uniform Traffic Control Devices (MUTCD) guidelines. An exception to the MUTCD guidelines was needed. Determined to employ blue LEDs in their crosswalk system, they pursued the request for an exception with the City of Denver and the Colorado DOT. Eventually, Semple-Brown was rewarded with approval to move forward. Based on the design and length of the crosswalk, twenty-two TS-600 fixtures were ordered.

Design Electric was hired to install the fixtures. Kevin Bushman, Electrical Foreman, describes his installation experience, “This is the first time I’ve seen a system so easy to install. It went in quickly and it’s worked ever since. It’s appealing and attractive. They highlight the crosswalk and improve the visibility of pedestrians. The general public loves them. They love using that crosswalk. It calls driver attention from the road to the people. Drivers started reacting to them immediately. They actually notice the crosswalk, slow down, and stop when people are crossing. Before, they would drive through the crosswalk without slowing down.”

Dalton Davis, Project Architect with Semple-Brown, shared his thoughts, “The crosswalk safely connects and promotes the flow of pedestrians between the two sides of the center. The project is a definite success because the system accomplishes what it’s intended to do, alert drivers to pedestrians in the crossing area.” Matt Trasen, of Gart Properties commented on the effectiveness of the system, “As a warning to oncoming cars, the lights are effective. Instantly from the day it opened there’s been a steady stream of people crossing there, some pushing baby carriages, some with wheelchairs, and others carrying shopping bags. The system has helped increase circulation in the mall. It was a successful project.” Trent Lockett, general contractor with the Buchanan Yonushewski Group, also commented on the visual appeal, “I have to say the blue color is nice. The lights are bright, and they serve the function that the architect had in mind, which is to illuminate the street, highlight the crossing and pedestrians, and get the attention of drivers. Even during the day the LEDs are bright.” With high marks for both safety and style, the installation at the Denver Pavilions was a complete success. Most of all, the shoppers at the Denver Pavilions are benefitting from a safer crossing.