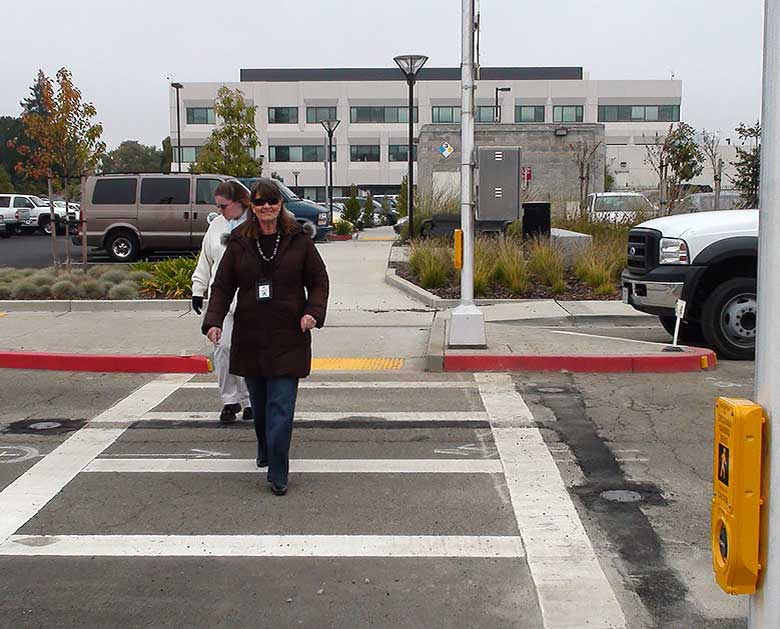 When the City of Vallejo, CA expanded their civic service center, they planned for increased parking facilities to accommodate the increase in visitors to the center. As part of the project, the safety of these visitors was taken into account. A key crosswalk connecting the overflow parking area to the building complex was identified for safety enhancement, and an in-pavement warning light crosswalk system from Traffic Safety Corp. (TSC) was chosen. Ted Vaeches, Marketing Manager for TSC, explains the basis for the decisions, “Located on Virginia Street, the crosswalk from the overflow parking facility to the main building complex was chosen for safety enhancement treatment because of the large increase of car and pedestrian traffic expected at this crossing. As for what type of treatment to use, the City had previously installed a TSC in-pavement warning light system and was very pleased with the effectiveness of the system at reducing accidents. Deploying a second TSC system was an easy decision.”

The effectiveness of the TSC system is due to a combination of the bi-directional design and brightness of the in-pavement lights, the high visibility of the flashing LED pedestrian crossing signs, and the TS1000 system controller’s ability to generate and automatically sequence enhanced flash patterns.

City officials began coordinating with TSC dealer Ed Campbell to work out a solution. After studying the site, they drafted a plan. Vallejo would soon be home to the City’s first solar crosswalk. Ed explains the equipment selection, “Vallejo chose to go with a solar powered TS1000 system because of its ease and speed of deployment. Virginia Street is a one-way street, but because of the location of the main parking lot exit, there is a possibility of cars exiting and driving in the wrong direction. For this reason, bi-directional TS-600 fixtures were selected. The bi-directional design would also allow for highlighting and silhouetting of pedestrians at night or low light conditions, improving the visibility of the pedestrians during these critical times. Two flashing LED signs were added, further increasing the visibility of the crosswalk. A basic push-button activation device was selected based on the public’s familiarity with the device, and its ease of use.”

Going solar makes for faster system deployment, reduced remediation issues, and lower operating costs. Foreman Electrician Dustin Rubio with Mike Brown Electric, enjoyed those benefits firsthand, “Installing a solar powered system was a positive experience. There was no need to rely on a power connection from a power or utility company. That’s instant gratification for us! Hook-up to the grid can be a hassle. Depending on your contacts at the power or utility company, it can take a long time to schedule the hook-up and have the system fully functional.”

Installers were pleased to be provided with an onsite briefing by Ted Vaeches. Ted explains, “Our installation documentation is very complete, but to ensure an issue-free installation, it is our policy to contact the onsite project manager and provide them with a briefing on the system. The actual installation is quite simple, so the briefing takes just ten minutes or so. We point out that the fixtures need to be installed level with the road and aligned parallel with the direction of traffic. We also point out that a drain is required below the fixture, typically a simple French drain. Finally, we point out that the system supplies a low voltage DC control signal to the warning devices and that the cable color codes for DC wiring must be used. By being aware of these three simple facts, most, if not all, installation issues can be avoided.”

Sometimes, despite all precautions, a wiring error or problem is encountered. Ted Vaeches explains, “In this installation, when the system was turned on, the fixtures didn’t flash as expected. The system disconnects, located in the TS1000 controller enclosure, allowed us to quickly isolate the street wiring from the system controller. We then quickly determined that the cause was a short in the street wiring. The problem was traced to a sliver of wire located between two splices and was quickly repaired. Upon completion of the repair and replacement of a blown fuse, the system worked perfectly.” Dustin Rubio went on to add, “Other manufacturers’ fixtures might require fewer steps to install, but they’re pretty cheesy. Lights come loose from the roadway and we’ve had to replace them. TSC systems require a little more labor, but overall they’re a more durable, higher quality system.”

Once activated, it wasn’t long before the system started attracting fans and new users. Dustin Rubio commented on the results, “It looked great. It’s a solid, durable system. City officials were happy and appreciated the work. Employees from the surrounding building began using the system and we’re really happy with the added safety it provides.”