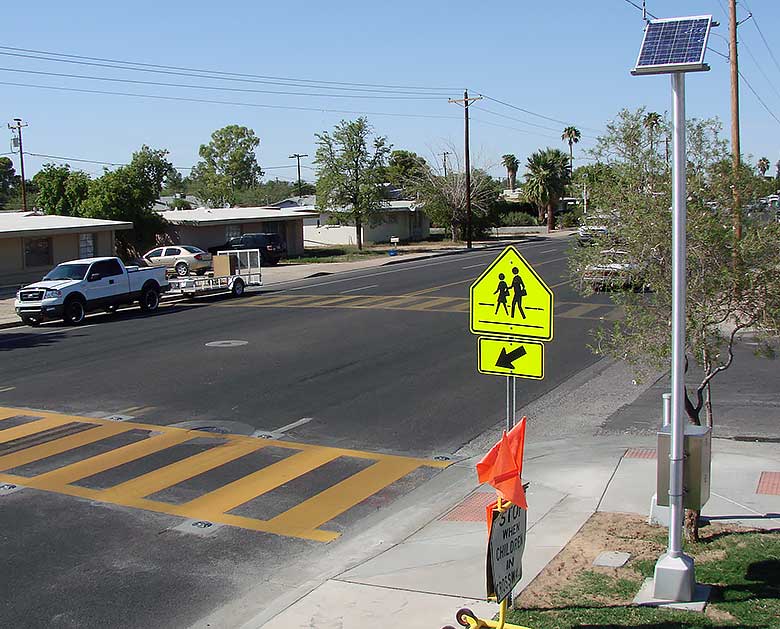 Casa Grande had previously installed a TSC system. To determine equipment for that project, competing manufacturers’ systems underwent a field comparison. Signal Light Technician for the city, Alonzo Lopez, recalls, “After evaluating the Smart Stud and LightGuard systems, we went out to the TSC system in a town called Marana, just outside of Tucson. Once we saw the TSC system in operation, we immediately selected it as the best system. We thought, this is exactly what we want.”

A similar system would be used to augment the mid-block crossing at Evergreen Elementary. The popular crosswalk spans five lanes and is used to access the school, the Trinity Southern Baptist Church and four Little League baseball diamonds nearby. To configure the system, the City worked with Joe Wise, TSC dealer for Arizona and President of Solar Traffic Controls. He proposed a robust, solar-powered solution to maximize pedestrian safety and minimize installation, operation and maintenance costs. The resulting configuration consisted of ten TS-500 LED bi-directional inpavement fixtures, dual 8″ flashing beacons on warning signs at both approaches, Ped-X-Pad activation at each curb, and a solar-powered controller to run it all.

While sophisticated in design, the system was easy to install. Casa Grande used their Street Department, Signal Light Division, to perform most of the work. Signal Light Technician Alonzo Lopez explains, “We set it up real nice, real quick, the installation was pretty simple. We didn’t have to tie into an Auxiliary Power Supply [APS] or run extra conduit to any services because the solar advanced warning signs are self-contained. They’re radio activated, so there’s much less to do. There’s no running trench or overhead lines to the signs.” These features dramatically reduce installation, operation and maintenance costs.

After a successful installation, Mr. Lopez immediately noticed the system’s effects on traffic, “Drivers are slowing down and stopping. I’ve driven the road and the lights really get your attention. It gets the public’s attention too. People are thrilled with the performance of the system and have begun helping the city identify other dangerous crossings in need of safety improvements.”

The City of Casa Grande understands the negative effects that growth can have on pedestrian safety. The city took a proactive approach to accident prevention at Evergreen Elementary by installing a TSC crosswalk warning light system. The solar-powered system was cost-effective to install and virtually free to operate. The city has budgeted funds for two pedestrian safety systems per year for the next several years to help keep communities safer and more walkable for years to come.